In the Media » AB Testing Feature by Convertize; Fashion Sells Better on Mobile

This article was originally published on ExchangeWire.com

Autopilot Mode combines the Frequentist and Bayesian approaches to AB testing, helping retailers analyse more data points over a shorter period of time, yet also taking past results into account, too.

Philippe Aimé, CEO, Convertize, explains the concept: “In our experience, the Frequentist approach is faster, but Bayesian can be more reliable. Not wanting to forgo either benefit, we devised a hybrid approach. The result is an algorithm that continually recalculates the best-performing variant and automatically pushes more traffic to it.

“The use of a hybrid approach of Frequentist and Bayesian in AB testing means that users of the Convertize platform are now able to leave the algorithm to decide on the traffic split for their AB tests. Typically, there is strictly no-peeking at results before AB testing is complete, as this could prevent the experiment from being accurate. This could mean weeks of potentially trying to direct a large proportion of visitors to a less-optimal variant, which can cost companies vast amounts of money.”

Convertize say the advantage of the hybrid solution is its continuous and simultaneously recalibrated traffic allocation while keeping AB testing costs low. Based on the outcomes, site visitors are taken to the higher converting version of a retailers website. Conversions are already running while the tests are still in place.

Based on a sample of European fashion retailers, Facebook finds in a study that 60% of fashion purchases visible to Facebook are made via a mobile device. Successful fashion shopping journeys that are conducted in fact have at least one mobile touchpoint in 70% of the cases. 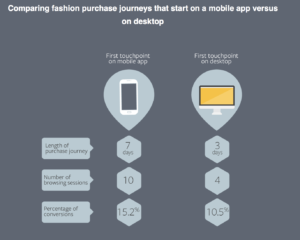 Drilling deeper into the sample, Facebook finds that fashion purchase sessions that start out from a mobile app tend to last longer and show more variety in terms of product and browsing. Starting out from mobile devices, shoppers spend up to seven days on a purchase journey, while desktop-initiated shopping lasts three days. Mobile leads to a conversion in 15.2% of the cases, while desktop has a 10.5% conversion rate.

Looking at their own services, Facebook examined user behaviour while in store, based on a survey of 4,598 people across the UK, Germany, France, Italy, Spain, and the US. Many people said they use apps and services during a shop visit; and more than half of them saying they are open to receiving coupons or offers on their phones while shopping in stores.

The target group most likely to welcome offers on their phones while shopping were shoppers between the ages of 18-54 years. Also, survey participants in the US were most open to the idea of receiving in-store offers on their mobile phones, while German shoppers were least likely to be receptive to such communications. 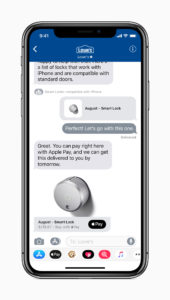 The latest release of Apple’s iOS mobile version has features in store that might prove useful for retailers. New in iOS 11.3 is Apple’s ‘Business Chat’ functionality, promising businesses to communicate directly with their customers. Facilitated by the Messages app, customers can get in touch with customer service, make purchases, and schedule appointments.

Although hailed as the next big thing in the management of customer service, the adoption of chatbots is still slow. That is where Apple is coming in, promising a new way for users to communicate directly with businesses – to the benefit of Apple’s own messaging platform.

The feature is now launching in beta, supported by a number of US companies including Discover, Hilton, Lowe’s, and Wells Fargo.”

You can read more about A/B Testing on our blog, take the guesswork out of testing with our suggested conversion rate tactics and automatically deliver winning pages with Convertize Autopilot™.

Recent Articles In In the Media

Reading Time: 2 minutes This article was originally published on MartechAdvisor and as part of the MarTechSeries. -- Convertize, the digital consulting...