How Barack Obama used website optimisation to get re-elected

In 2012 Barack Obama made history. Not only was he the first black US president to be re-elected. But he and his team achieved the most successful fundraising campaign in US history. He was the first candidate ever to receive $1 billion in donations, of which an incredible $690 million was raised digitally. (source: Time Magazine). Not only that, he outperformed his Mitt Romney in digital fundraising by a massive 379% (Source: www.targetedvictory.com).

How did he achieve these staggering figures?

Kyle Rush, now Deputy CTO for “Hillary for America”, and in 2012 a major contributor to Obama’s success, mentions these key results from their website optimisation campaign:

This was achieved by running more than 500 different tests. In other words, optimisation of the Obama donation website and landing pages was a critical factor in his success.

If I asked you to guess what sort of tests they ran that resulted in this huge increase in donations, what would you say?

Snappy headlines about his new policies?

Adding articles that listed all the achievements of his first term?

No. These things had almost no impact with the success of his online campaign.

In actual fact, the vast majority of these tests were based on hypotheses that were targeted to the part of the brain that takes 95% of the decisions. Hypotheses that help guiding visitors’ behaviour. This part of the brain (“system 1” according to the Nobel Prize in Economics, Daniel Kahnemann) takes decisions based on what we call “cognitive biases“. There are hundreds of cognitive biases, incidentally.

What is a Cognitive bias ?

The definition of a cognitive bias is as follows:

A cognitive bias refers to a systematic pattern of deviation from norm or rationality in judgment, whereby inferences about other people and situations may be drawn in an illogical fashion. Individuals create their own “subjective social reality” from their perception of the input.

Clearly, we’d all prefer to avoid them and make rational decisions but we’re all human and we’re all affected by the power of cognitive bias.

The most interesting thing about cognitive bias is that in 99% of cases, we don’t even realise that our behaviour has been influenced.

Here’s an example. A while ago, I was looking for a digital camera on Amazon. I typed in the camera model I was interested in and got the following results: 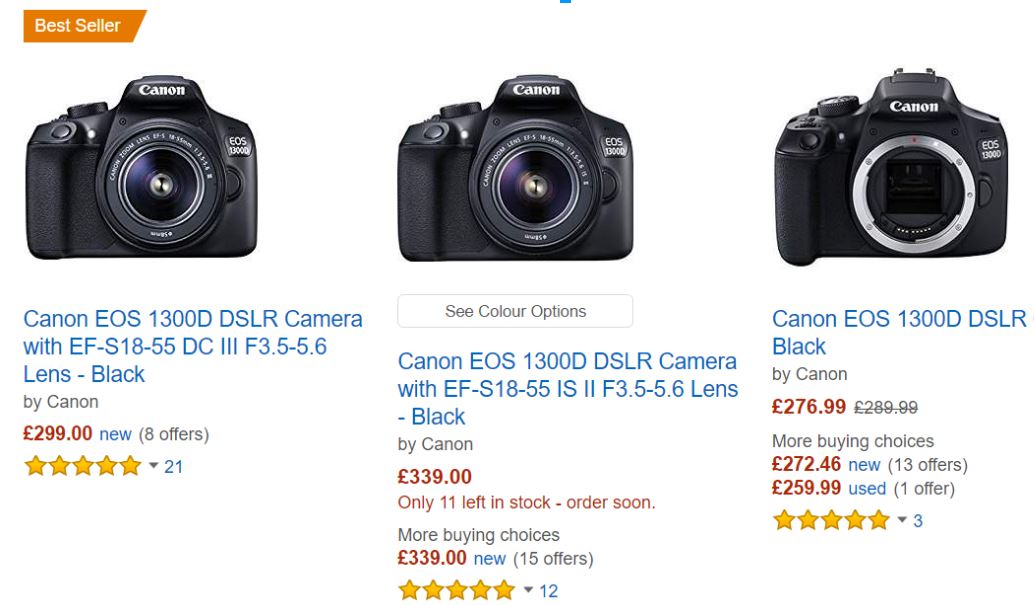 Do you notice anything in particular (aside from “Best Seller”)?

However, those search results have been optimised thanks to a cognitive bias that we call the decoy effect (or asymmetric dominance effect). Dan Ariely, a professor in behavioural economics, did a lot of research on this bias. When a visitor has second thoughts, introducing an additional option that is “asymmetrically dominated” acts as a decoy to increase preference for the dominating option and therefore influence the visitor’s decision.

Usually, the best approach is to use a decoy slightly less attractive that the product or service that you want to sell.

For example, an item with similar features but that’s more expensive, or one that has a “defect” but is the same price.

This cognitive bias occurs because our brain does not evaluate things based on the absolute value, but by comparison instead. When a client has to choose between products that are slightly different in terms of features and/or price, the decision is harder.

The result: most of the time your customers will not make a decision. But by introducing a decoy, the comparison become easier.

The majority of tests used in Obama’s campaign that had a big impact used strategies based on those cognitive biases but also on psychology of persuasion and other neuroscientific concepts.

Here’s a tangible example of a technique that Kyle Rush and his team applied to the Obama campaign:

Their original donation form on the Obama website was long and the task of making a donation seemed complicated. To persuade users that donating was a simple task, they changed the form to a sequential one, which only showed users a few fields at a time: 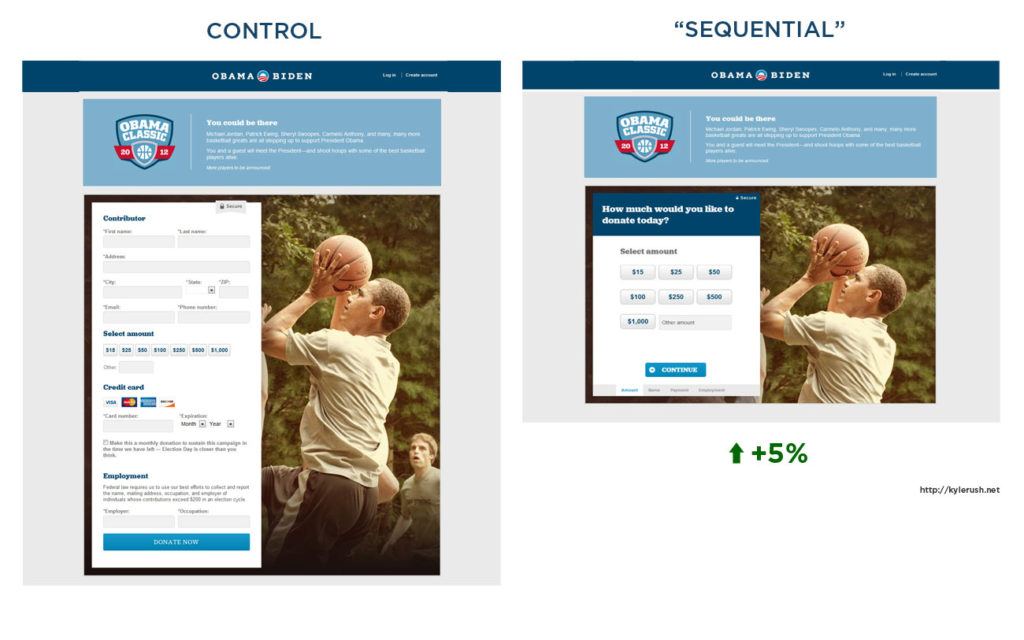 The sequential version was a big success, resulting in a 5% uplift in conversion – all from a simple change.

You might think all this sounds simple and easy to apply to your own website. You’d be wrong. For Obama, it wasn’t just a case of picking something at random to test and loading up some simple A/B testing software. His campaign had a large, highly-skilled team with in-depth knowledge of consumer psychology and neuromarketing.

So how can you understand how users think and persuade them to do what you want if you don’t have a degree in psychology or the resources of a US President?

Convertize uses neuroscience and consumer psychology to suggest persuasion tactics that can then be implemented and A/B tested at the click of a button.

With Convertize you can say goodbye to the frustration of not knowing what to test or how to test it. The software will analyse your website and use its library of neuromarketing tactics to suggest improvements. This is important because each website is different and what works for one may not work for yours.

Then, using a user-friendly interface, you can A/B test the tactics against your current website version and monitor the uplift in performance. Just like Obama did.

Reading Time: 3 minutes Looking back, I really didn’t need that overpriced cup of coffee this morning but the seasonal...