Is Social Proof a Dark Pattern?

In 2009, User interface designer Harry Brignull coined the phrase “Dark Pattern” and decided to maintain a website that documents them in an effort to shame the programmers behind them.

Since 2010, government and non-profits had a raising interest towards monitoring and preventing dark patterns in order to protect consumers.

What is a Dark Pattern?

Brignull defines a Dark patterns as user interface design choices that benefit an online service by coercing, steering, or deceiving users into making decisions that, if fully informed and capable of selecting alternatives, they might not make.

While filling in a form you respond to a question that tricks you into giving an answer you didn’t intend. When glanced upon quickly the question appears to ask one thing, but when read carefully it asks another thing entirely.

You attempt to purchase something, but somewhere in the purchasing journey the site sneaks an additional item into your basket, often through the use of an opt-out radio button or checkbox on a prior page.

You get into a situation very easily, but then you find it is hard to get out of it (e.g. a premium subscription).

You are tricked into publicly sharing more information about yourself than you really intended to. Named after Facebook CEO Mark Zuckerberg.

The retailer makes it hard for you to compare the price of an item with another item, so you cannot make an informed decision.

You get to the last step of the checkout process, only to discover some unexpected charges have appeared, e.g. delivery charges, tax, etc.

You set out to do one thing, but a different, undesirable thing happens instead.

The act of guilting the user into opting into something. The option to decline is worded in such a way as to shame the user into compliance.

Adverts that are disguised as other kinds of content or navigation, in order to get you to click on them.

When your free trial with a service comes to an end and your credit card silently starts getting charged without any warning. In some cases this is made even worse by making it difficult to cancel the membership.

The product asks for your email or social media permissions under the pretence it will be used for a desirable outcome (e.g. finding friends), but then spams all your contacts in a message that claims to be from you.

All these “Dark Patterns” refer to false information, misleading or hidden content and forced actions.

In June 2019, a group of researchers from Princeton University published a document entitled “Dark Patterns at Scale: Findings from a Crawl of 11K Shopping Websites” by Arunesh Mathur et al.

And they decided to introduce new Dark patterns such as Social Proof, Scarcity and Urgency.

In his extensive Medium publication “What Princeton University researchers got wrong about Dark Patterns”, Jochen T. Grünbeck explains what is wrong with this research document.

The Authors mention that in reality just 183 out of 11000 websites really use deceptive patterns, which is a mere 1,66%.

So why not calling it “Less than 2% websites use deceptive practices”? Did they authors want to use FEAR and AUTHORITY to promote their own publication?

AUTHORITY is another potential Dark pattern: dress like surgeon and I will trust can you are a Doctor. Use your Title or the name of your School and I will believe what you write or say.

Additionally, it’s interesting to note that the authors are influenced by the confirmation bias: at least 3 of the Study’s Authors (Arunesh Mathur, Arvind Narayanan and Günes Acar) have been dealing with investigating companies’ data collection, data use, and deceptive practices, and they interpret information to support their existing belief.

Is Social Proof a Dark Pattern?

Arunesh Mathur et al. classify Social Proof as a Dark pattern and describe it as “Influencing users’ behavior by describing the experiences and behavior of other users.”

To quote Wikipedia, Social proof is a psychological and social phenomenon wherein people copy the actions of others in an attempt to undertake behavior in a given situation.

Think about all the situations in life where you encounter Social Proof.

If Social Proof was a Dark pattern, people should stop queuing in front of restaurants and we should also stop watching them.

The way most e-commerce and online businesses use Social Proof is honest (remember, only 1.66% use deceptive practices according to the survey). That means that they show you real numbers and real reviews from real customers. Just like the things you can see easily everyday in the street.

Social Proof App like Nudgify have made clear statements about Dark patterns and especially Fake Social Proof in their Ethical Social Proof publication.

When used incorrectly, Social proof can become a Dark pattern, but in most cases it’s based on genuine information, hence not deceptive.

How powerful are Dark patterns vs Social Proof

In a more recent publication in the Journal of Legal Analysis: “Shining a Light on Dark Patterns – 23 March 2021“, Jamie Luguri and Lior Jacob Strahilevitz wanted to have evidence of the power of dark patterns.

So they compiled the Dark patterns identified by a few researchers including the one from Princeton: Social Proof, Scarcity and Urgency.

This is their “summary of existing dark pattern” taxonomies:

And they also mention this:

In our revised taxonomy we have been more careful than the existing literature to indicate that social proof (activity messages and testimonials) and urgency (low stock/high demand/limited time messages) are only dark patterns insofar as the information conveyed is false or misleading. If a consumer is happy with a product and provides a favorable quote about it, it is not a dark pattern to use that quote in online marketing, absent a showing that it is misleadingly atypical.

In order to assess the power of each pattern, Luguri & Strahilevitz decided to conduct A/B Testing with a sample of 1,963 participants.

They tested how participants accepted to give their consent by introducing different patterns in different variations.

Here are the A/B Tests Statistics for their Study 2, that did not contain any aggressive dark pattern:

So Dark patterns are indeed very powerful, it’s also why they should be monitored and eventually regulated.

But Social Proof is also very powerful: it can increase your conversion rates by up to 43% according to the A/B tests conducted by Luguri & Strahilevitz.

How can you apply Social Proof to your website?

In these articles, you’ll find ways to use Social Proof on your website:

Then you can also use some Social Proof Apps such as Nudgify. 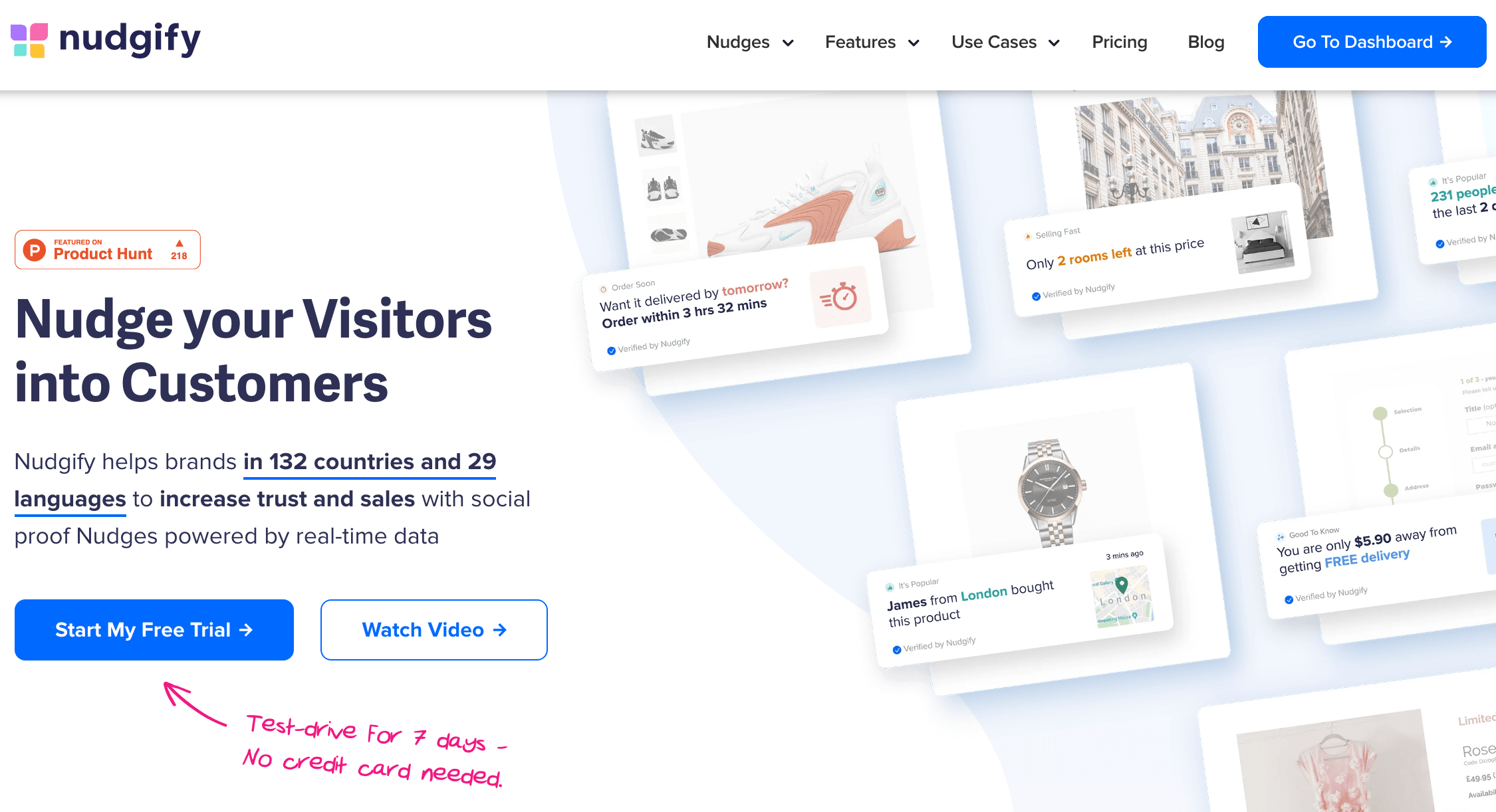 Nudgify turns your data into Social Proof. It’s the easiest way to add Social Proof to any page of your website.

The whole concept of Nudgify is based on Nudge Marketing.

You can show recent activity, such as page views and recent sales, on any page. You can also showcase your best testimonials from Trustpilot, Google Reviews or Capterra. However, Nudgify also allows you to show when stock is running low, when a deal is ending and how much a customer needs to spend to qualify for free delivery.

Nudgify wants to help any business to re-create real-life experience.

Final Words: How Not To Use Social Proof

However, Social Influence works both ways and can also backfire. While the Nancy Reagan’s “Just say no” anti-drug campaign aimed at reducing drug use by American children, it actually increased it because it made things more public.

You need to be careful when using negative examples, it can unintentionally encourage negative behavior.

The theory behind negative social proof is that, if we see that a lot of people did something “bad,” we can be encouraged to do the opposite.

Companies and Marketers obviously don’t like to see see bad reviews. They worry about the consequences on their business. Which is legitimate since 67% of Consumers are influenced by online reviews.

But did you know that bad reviews also help to build trust.

According to Reevo, “68% of people trust reviews more when they see both good and bad scores. They don’t look at reviews in isolation; they definitely notice – and become suspicious – if there are no bad reviews.”

That doesn’t mean you should show only you bad reviews. Just feature positive reviews more prominently within your content.

The purpose of social sharing buttons is not only to help readers to share your content – they also show how many people have already shared that content.

The use of sharing buttons with counters is usually a good practice, but they can backfire. If someone can see that a content or product they wanted to share has 0 Share, they will be less likely to do so.

Avoid using social proof sharing buttons until your site has many shares and customers regularly sharing your content.

Also replace the counter by a message when there is 0 share. So that you encourage users to do so and turn it in a positive way: “be the first to share this content”.

Social Proof & Digital Marketing: How to Use It, with Examples

Reading Time: 7 minutes Have you ever wondered why TV shows use canned laughter, or why bartenders put money in...