Have you ever wondered why some websites are better than others at turning visitors into customers?

According to a recent study, members of Amazon Prime convert on a remarkable 74% of their sessions. Amazon is not unique in this respect. Travel sites such as Booking.com rely on exceptional conversion rates to keep their business going.

So, what is it that makes some websites so persuasive?

This question has been bothering neuromarketing enthusiasts Philippe Aimé and Jochen Grünbeck for over a decade. Other questions have, too. For example:

Philippe and Jochen have over 60 years of digital marketing experience between them. Even so, it has taken another 5 years of research, testing, and literature reviews, to arrive at some answers. The result is Smart Persuasion, a book explaining why some websites influence consumers and others don’t.

In a dusty auditorium in the heart of MIT, a class of students took their seats. To their surprise, they were presented with a grainy slide showing three options for buying The Economist. The lecturer, Professor Dan Ariely, asked them which they would choose.

The students were understandably confused. When the results were counted, 84% of them had chosen C and 16% had chosen A, but that wasn’t the question they wanted an answer to. They wanted to know who on earth would choose option B, and why it was on the list…

Later the same day, another class arrived at the auditorium. This class was presented with a different choice.

Ariely counted up the results again. This time, 68% had chosen A and only 32% had chosen C.

The students might have wondered why their Professor seemed unusually excited; they didn’t know that they had just taken part in an experiment. Option B was an example of Decoy Pricing, an Optimization Principle that allows you to influence consumer choices. 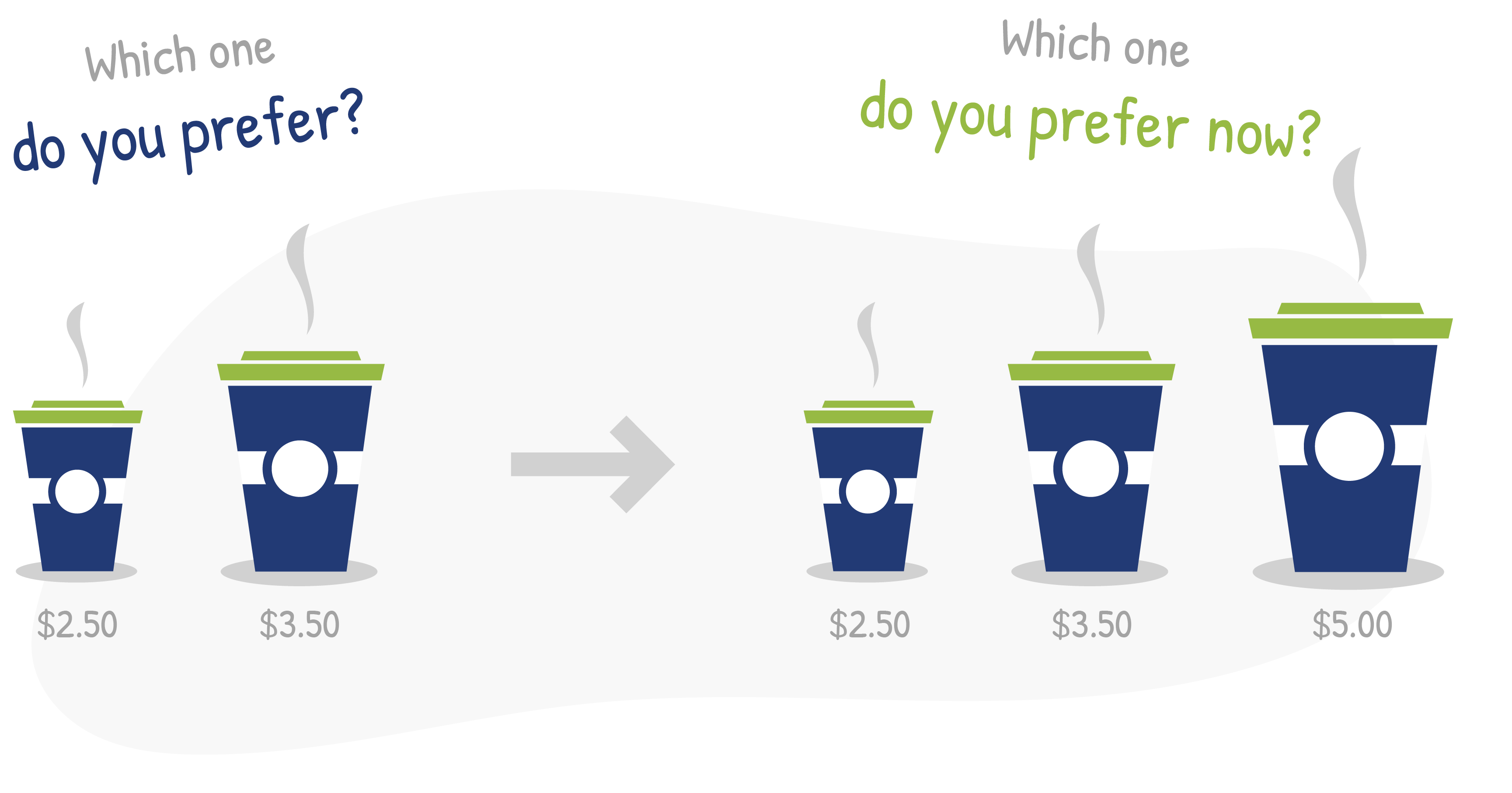 By offering an “asymmetrically dominated” decoy, you can steer customers towards an option that suits you.  The effect is one of over 70 principles identified by Aimé and Grünbeck in their survey of published neuromarketing research. The same effect has allowed them to increase the revenue produced by eCommerce websites on hundreds of occasions.

…and Persuade Them to Take Action

In 1736, Benjamin Franklin was chosen to be the Clerk of the Pennsylvania Assembly. The following year he was again nominated, but on that occasion a member of the House delivered a speech against his appointment. Benjamin Franklin described his response in his memoirs.

Rather than attempting to win the man over, Franklin wrote to him and asked to borrow a rare book from the man’s library.

…he sent it immediately, and I returned it in about a week with another note, expressing strongly my sense of the favour. When we next met in the House, he spoke to me (which he had never done before), and with great civility; and he ever after manifested a readiness to serve me on all occasions, so that we became great friends, and our friendship continued to his death.

Franklin observed the fact that helping someone makes us feel more positively towards them. Known as the “Ben Franklin Effect”, this principle is one of the most valuable techniques used in digital marketing.

Most people believe that they treat other people according to how they feel about them. However, the opposite is equally true. People will develop positive feelings towards your company or your products if they are asked to contribute towards them.

Combined with the Reciprocity Principle, which describes people’s tendency to match your behaviour, the Ben Franklin Effect is used to create highly persuasive business communications. consider the following email sequences…

Email 1) The Lead Magnet “This is your complimentary free chapter…”

Email 1) The Lead magnet “This is your free chapter…”

Email 2) The Ben Franklin Technique “We don’t like asking for help, but we need you advice…”

You might assume that Scenario A, as the least intrusive sequence, would convert more frequently. In fact, the research collated by Aimé and Grünbeck over the past 5 years (including a century of psychological studies) suggests that Scenario B will be far more persuasive.

Smart Persuasion contributes to the expanding body of work relating to neuromarketing and consumer behaviour. It provides an accessible way to understand some of the more complex psychological and theoretical ideas discussed by writers such as Kahneman, Cialdini and Ariely. Most significantly, it bridges the gap between marketing theory and marketing practice.

Reading Time: 6 minutes Advertising on a CPA (Cost Per Acquisition) basis means that you only pay for an ad when...