How To Understand and Shape Consumer Behaviour. With Examples

Consumer Behaviour is the study of why people buy things and how they choose what to buy. Experts in consumer behaviour take ideas from psychology and economics to help analyse and explain the choices we make. For example, scientists like Richard Thaler, Daniel Kahneman, Dan Ariely and Robert Cialdini have shown how the decisions we make are both irrational and yet predictable.

This Guide to Consumer Behaviour will show you:

On 8 December 2017, Richard Thaler was given the Nobel Prize for Economics. The award recognised his contribution to Behavioural Economics. However, the selection caused controversy; Thaler was not a normal economist.

Thaler’s ideas have become central to the way we think about Consumer Behaviour. But, before we explain why his 2017 award was so significant, we define what we mean by “Consumer Behaviour”.

What is Consumer Behaviour?

Definition – Consumer behaviour is the study of the people and the activities associated with a purchase. It explores how products are chosen, distributed and used, as well as the emotions, psychology and behaviour they create.

Marketers would love to see exactly what makes a customer buy. If they could install a recording device in their customers’ minds, like the black box inside an aeroplane’s cockpit, what would they find?

Unfortunately, there is no way to record what happens inside a customer’s head. Reverse-engineering this missing black box, is the study of Consumer Behaviour.

A History of Consumer Behaviour

In the early 20th-century, marketing was dominated by ideas from classical economics. The consumer was seen as a rational person who made choices and behaved in predictable ways.

By the mid-century, this perspective had come unstuck. Within psychology, the “Cognitive Revolution” had demonstrated that it was possible to gain practical insights into how people think. What cognitive studies showed was that The studies many of the decisions we make are completely irrational.

In 1974, two psychologists named Daniel Kahneman and Amos Tversky published a disruptive article: Judgement under Uncertainty. In it, they showed how “heuristics” like Availability and Anchoring bias everyday decisions.

What are heuristics? Heuristics are ways of making decisions without having all the information or time needed to choose rationally. They tell us which option feels right, but are subject to clear biases.

Having been launched in 1964, the Journal of Marketing Research began to regularly publish articles based on the new psychological approach to marketing.

In a series of articles published in the Journal of Economic Perspectives between 1987 and 2006, Professor Richard Thaler highlighted what he called “Anomalies” in almost every aspect of consumer decision-making…

However, it was the 2008 publication of Nudge that brought his work to public attention. His model of consumer decision making, built around “Choice Architecture”, has influenced marketing, psychology and even public policy.

Marketing, particularly for eCommerce platforms, has been heavily influenced by Nudge theory. For instance, many websites now use subtle “Nudges” to encourage people to buy things. This practice, perfected by companies like Amazon and Booking.com is called Nudge Marketing.

The influence of Thaler’s ideas, as well as his work to make sure Nudges are used constructively, is why the 2017 Nobel Prize for Economics was given to such an unusual candidate.

Whilst Consumer Behaviour can sometimes focus on the purchase decision, it also includes other aspects of the consumer journey. For example…

Here are four of the most important concepts from contemporary work on Consumer Behaviour….

In 1967, Philip Kotler published his Marketing Management. Among other things, the textbook described five stages involved in a purchase. Since the publication of his work, Kotler’s five-stage model of the buying process has been widely adopted.

An alternative way of thinking about Consumer Behaviour is to profile the different ways people buy things. In 1986, a pair of consumer psychologists developed a universal consumer style inventory. George Sprotles and Elizabeth Kendall proposed eight characteristics that describe any given customer. 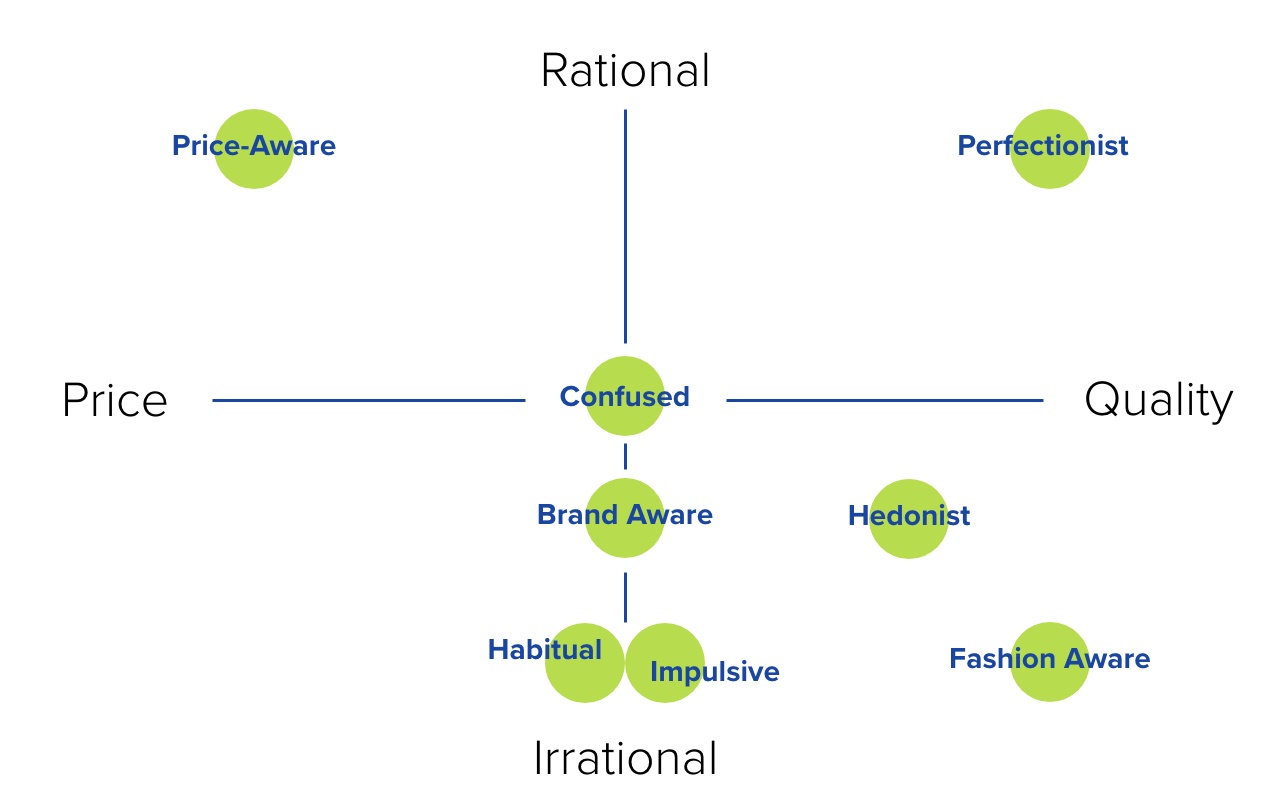 Both the Consumer-style and Five-stage model of Consumer Behaviour are subject to cultural variation and interpretation. In both cases, the framework must be used alongside real-time data to give the models predictive value. Within modern marketing campaigns, these models are primarily used for Market Segmentation.

Marketing a newly developed product involves a specific type of consumer behaviour. In his, The Diffusion of Innovations, the American sociologist Everett Rogers grouped consumers into five types of consumer:

These five groups respond in very different ways to new products. The majority of people will only accept a new idea or product once it has gained mainstream popularity. Because of this snowball effect, the adoption behaviour of large groups of people tends to take the shape of a bell curve (where most people occupy the middle-ground).

The impact of the diffusion bell curve can be seen in the way that a product’s market share increased rapidly during the middle phase of its growth. Once each group has adopted a new innovation, the market is considered “saturated”.

In his Thinking, Fast And Slow, the psychologist Daniel Kahneman identified a number of mental shortcuts that most people use when they aren’t paying much attention to a problem. This System 1 style of thinking is the type we use when we make most of our decisions.

Because this is an automatic and low-effort form of problem-solving, it often relies on approximate guesses and estimations. These shortcuts, also known as “heuristics” or “cognitive biases“, lead consumers to behave in irrational yet predictable ways.

Dan Ariely’s Predictably Irrational takes this insight even further, isolating a number of common biases that occur in everyday life. Turning conventional economics on its head, Ariely argues that most behaviour does not reflect the true costs and benefits faced by a consumer. Instead, he demonstrates that the decisions we make are almost always based on intuition and guesswork. Some common examples of these flawed judgements include:

By identifying common cognitive effects, marketers are able to make the most of their customers’ attention. They can also avoid falling victim to consumer biases.

4 Ways To Be More Persuasive To Consumers

Aspects of Consumer Behaviour are relevant at different times. For example, when you are updating a product it is useful to keep track of which of your customers adopt the update first. By segmenting your users into the five different kinds described by Rogers, you can target “Early Adopters” more accurately with any new products.

Here are four ways you can use Consumer Behaviour to make your marketing more persuasive.

When you are designing your most valuable marketing asset, it’s easy to forget how your customers will read it. A simple way to make your site more user-friendly is to design it with cognitive biases in mind.

2. Optimise Your Pricing For Consumer Behaviour

Whether or not you admit it, price optimization has shaped your purchasing decisions. Effects such as “Left Digit Bias” are quite familiar (it’s the reason why so many prices end in 99 or 95). However, there are a number of other important effects that shape our choices without us realising.

3. Build Your Campaigns Around The Purchase Process

Advertising with Google, Facebook or another platform costs a lot of money, but some keywords or audiences are more effective than others. If you are a smaller business, it doesn’t make sense to advertise to customers in the first two stages of the purchase process.

Targeting your ads at fewer consumers who are closer to the “Buy” button (for example, with highly-specific “long-tail” keywords) makes them much more likely to convert. For that reason, a “long-tail” strategy is often much more affordable.

4. Make Your Customers Feel Like Part of the “Early Majority”

Most marketers are familiar with Social Proof. It is the psychological effect that leads us to copy other people’s choices and behaviours. Whilst the effect is often used as part of Social Proof Marketing, it is also important to think about Social Proof when releasing a new product.

Since 34% of people are Early Majority consumers, you need to show them that they are not the first to try your product. You can do this with reviews, star ratings, or by showing recent sign-ups with a purpose-built Social Proof app.

Here are the references for studies featured in this guide. Some may require passwords or institutional logins to access.

This is our selection of the most influential Consumer Behaviour books of the past fifty years. For books related to neuromarketing, see our 2021 reading list.

This is our selection of the most influential Consumer Behaviour books of the past fifty years.

Reading Time: 7 minutes Landing page optimization is an essential part of attracting new clients and customers. Without an effective...