AB Tasty has announced the release of a new notification system for communicating Social Proof and Urgency to online customers: Nudge Engagement. At first, we were excited to see what our rivals had come up with. However, after reading the press release, we couldn’t help but notice that the system sounded strangely familiar. In fact, it felt as though we were reading a description of our own Nudge Marketing notifications.

Persuasive notifications, based on the principles of Social Proof and Urgency, have been a part of our Nudge Marketing app and A/B testing tool since their release.

The similarities between our Nudge Marketing notifications and the system described by AB Tasty are so remarkable that we felt obliged to comment.

We first launched our A/B Testing platform in 2016 and our Nudge Marketing App one year later.

Having studied the best-performing eCommerce websites (www.amazon.co.uk, www.booking.com, etc.) we saw that they all had something in common…

They were all applying ideas described by neuromarketing experts. In particular, they were using a technique called “Nudging” outlined by Richard Thaler in his Nobel-Prize winning Nudge. Although their individual approaches were different, they each found a way to communicate Urgency, Scarcity and Social Proof to customers.

It occurred to us that the same tactics would be useful for eCommerce stores of any size, if only they had the means to apply them.

That was how we arrived at the idea for a tool that anyone could use to apply Nudge Marketing notifications to their website. Our solutions have been available for the past two years, during which time a number of small and medium companies have become valued subscribers.

The App was so popular that we decided to create another solution specifically for Shopify store owners: Nudgify. The Shopify app was released in May 2018, and has become one of the most popular solutions in the eCommerce platform’s Appstore. 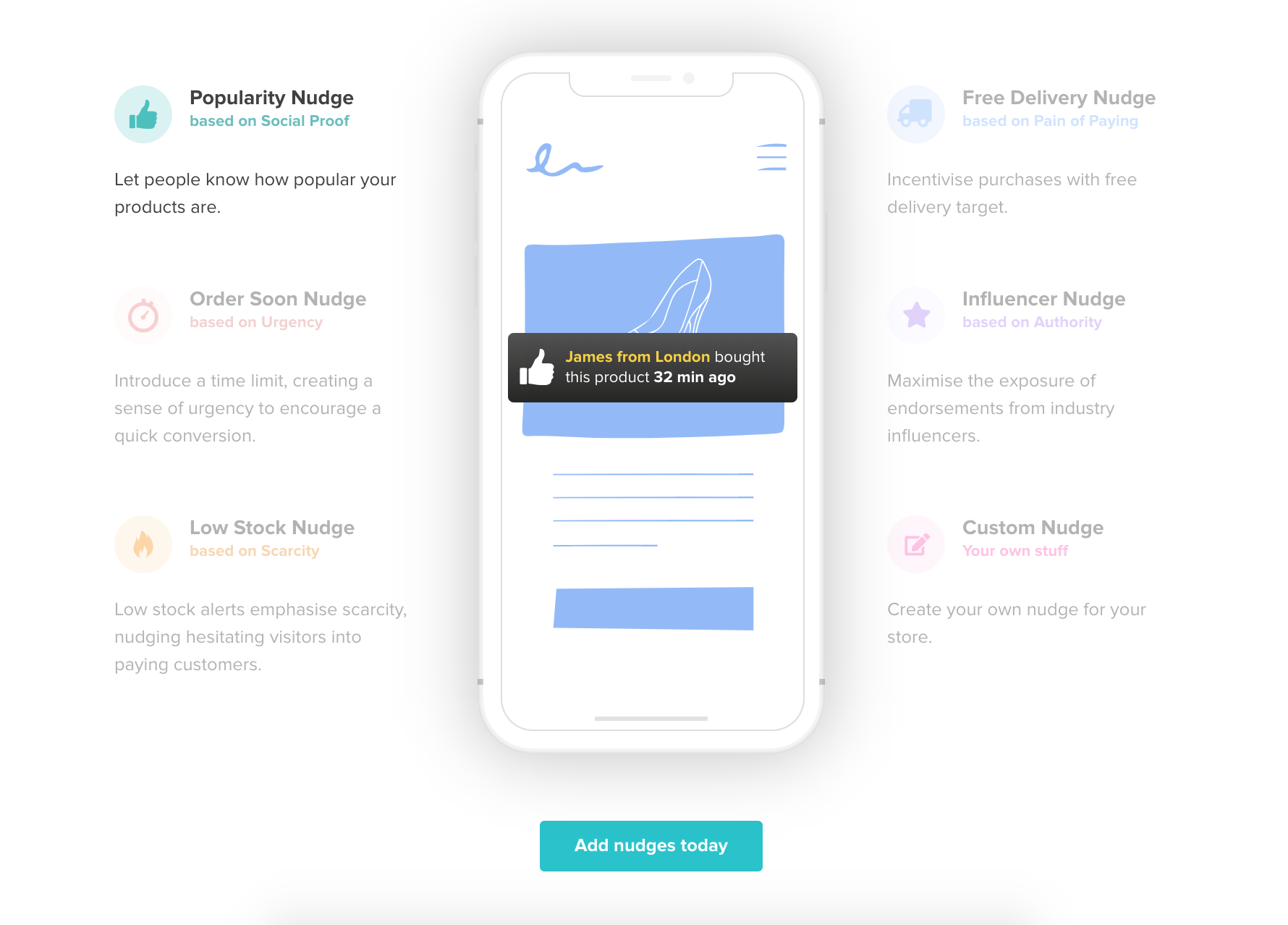 Nudge Engagement: A Bit Too Close For Comfort

For a long time, our Nudge Marketing notifications were the only solution of their kind on the market. These days, there are a range of ways to communicate persuasive messages to customers.

There are countless Conversion Rate Optimization solutions and Shopify Apps that apply Nudge Marketing principles to eCommerce. Almost all of them have included new and exciting ideas.

In under 5 minutes, you can apply Nudge Marketing triggers such as Social Proof, Scarcity, Urgency and more. Influence your visitors’ decision so that they act now

Turn browsers into buyers with dynamic social proof and urgency messaging. Create customizable messages showing how often a product has recently been viewed or purchased.

We are excited to welcome some competition. The more people become aware of A/B testing products and Nudge Marketing Apps like ours, the bigger the market for them will become. Our calculations show that this will more than make up for the customers we lose to competitors.

However, in the case of “Nudge Engagement,” we wondered if the resemblance between our product and AB Tasty’s new offering was entirely coincidental? Some of the similarities appeared so striking that they raised serious questions.

In the past ten years, AB Tasty has become a dominating force in the European SaaS market.

Part of the reason for their success has been the way they have imitated the design features of rival developers. The influence of market leaders such as VWO and Optimizely can be seen clearly in the company’s A/B testing tool, which features a visual interface similar to the one innovated by VWO.

When we launched our A/B testing solution in 2016, we were proud to say where our inspiration had come from. We wrote articles describing the different tools available for customers looking to test new pages and analysing how eCommerce websites used neuromarketing principles. When we launched our app, two years later, we were just as eager to discuss the Nudge Marketing theory behind it.

So, when AB Tasty released an explanation for “Nudge Engagement” without mentioning Richard Thaler, neuromarketing or Nudgify, we could not help asking ourselves if they had been as open and honest as we were.

Here is a statement from a Product Leader at AB Tasty:

Social proof and urgency messaging are two marketing notions rooted in consumer psychology that we know work. We’re proud to have leveraged our real-time, universal data collection capabilities to design these industry-specific, personalized and dynamic content delivery solutions. Nudging visitors to buy and consume media in this way is an effective method for our clients to see faster ROI, and an area we will continue to develop as we release more industry-specific templates in the months to come.

Presumably, when this Product Leader describes Social Proof and Urgency as “marketing notions” that “we know work,” they simply forgot to mention the decades of research that has identified these neuromarketing effects. They probably forgot to mention Robert Cialdini, Dan Ariely and Roger Dooley. It probably slipped their mind that Social Proof and Urgency messaging has been available to customers in a FREE app, and as part of an A/B testing platform, for the past two years…

AB Tasty and Google Optimize: A Nudge in the Wrong Direction

What prompted AB Tasty’s move away from software development and towards Nudge Marketing?

It seems likely that the decision to introduce these new features reflects the changes taking place in the A/B testing market.

In 2017, Google announced that its own testing platform, Google Optimize, would be available to everyone free of charge. In just two years, Google Optimize has claimed over 30% of the market for A/B testing software. To put this into context, Optimizely (the oldest and best known A/B testing solution) had a market share of over 75% in 2010. It now has a share of under 25%.

With the marketing advantage, development resources and brand power of Google (not to mention the fact that its solution is free) we have to expect that Google Optimize will develop a virtual monopoly over the A/B testing market in the coming years. As with Analytics, Gmail, Ads and Search, a combination of free software and vast resources will allow the American giant to control the market. If this turns out to be the case, companies like AB Tasty are right to try and diversify their offerings.

The rise of Google seems like a reasonable explanation for the launch of Nudge Engagement. However, it doesn’t explain why AB Tasty would release a product so similar to that of a direct rival. The only explanation we can give is that imitation has worked for them in the past…

Despite the remarkable similarities between our Nudge Marketing notifications and AB Tasty’s “Nudge Engagement“, there are still some differences between them.

One of the major differences between AB Tasty and Convertize is the people we work with. Whilst AB Tasty focuses on executive customers, Convertize aims to make A/B testing and Nudge Marketing available to everyone. Nudge Engagement currently specialises in two areas of eCommerce, Retail and Media. 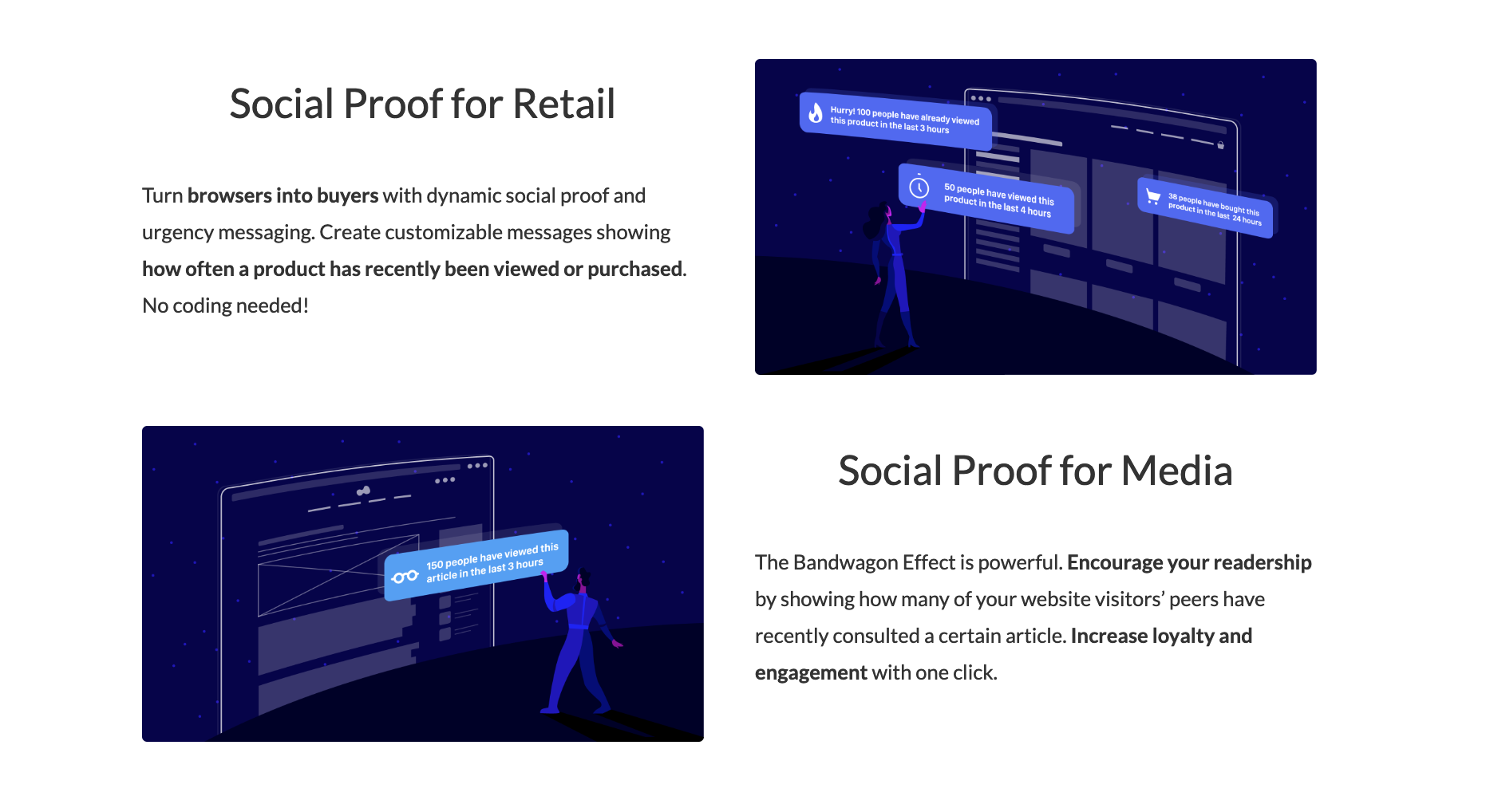 By contrast, our Nudge Marketing App can be applied to a range of industries. 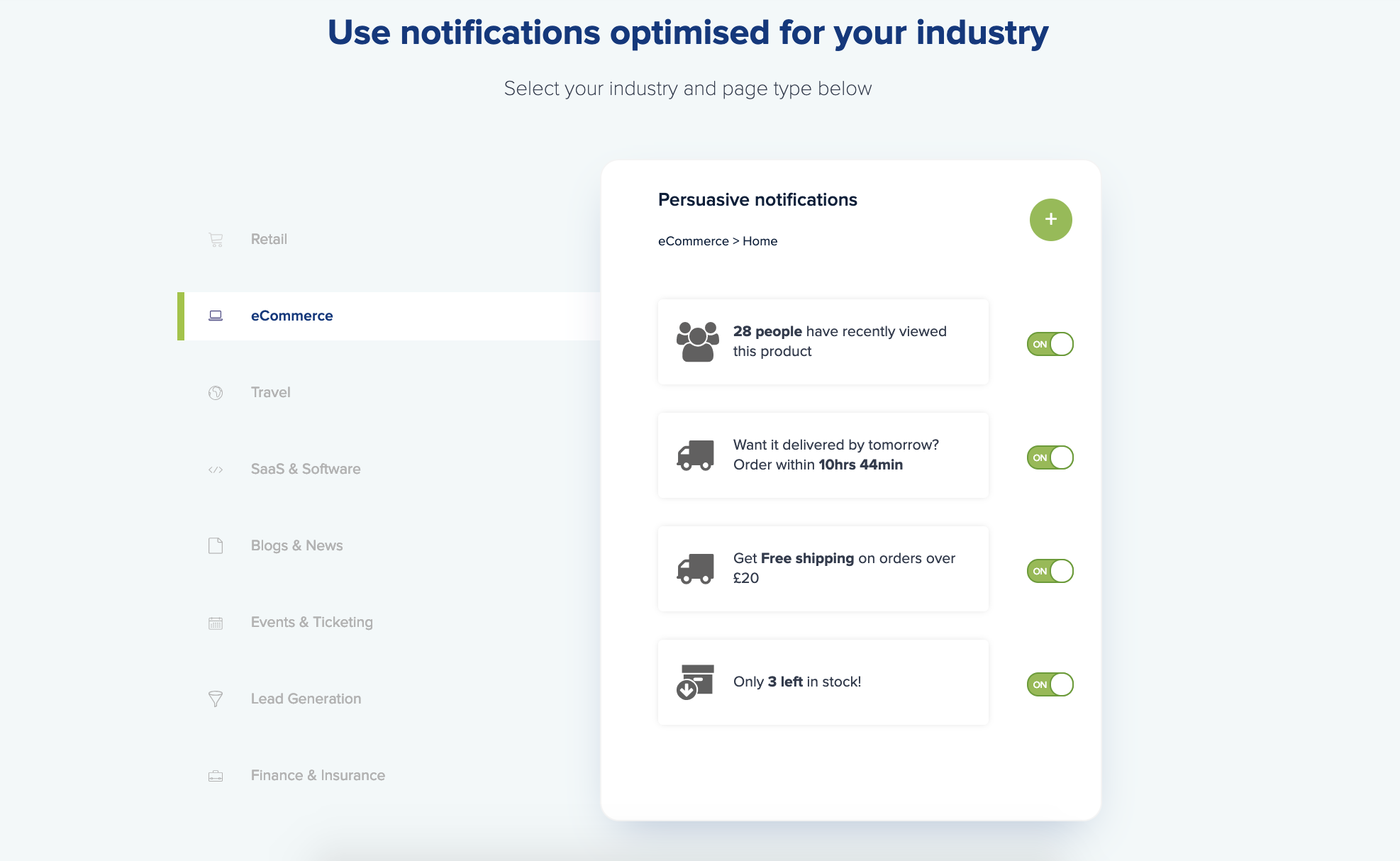 Our A/B testing tool guides users in how to apply notifications to their websites. It provides templates tailored to specific industries and page types.

There is also a difference in the way we communicate. Whilst you can find information about features, applications and pricing on our website, AB Tasty appears to have hidden this information. In order to find out how much Nudge Engagement costs, you will have to request a quote. 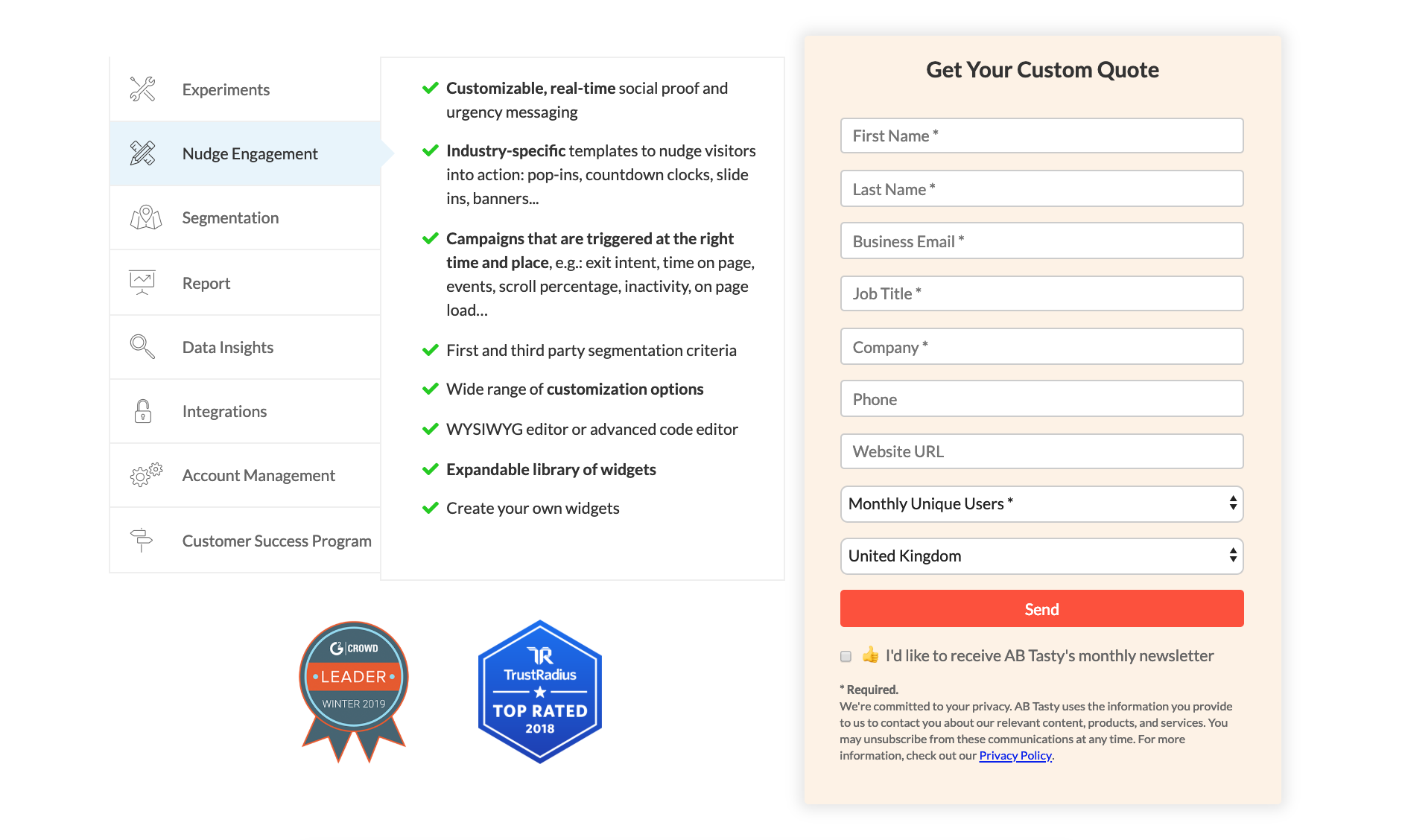 The most important difference, though, is this: Convertize understands Nudge Marketing.

AB Tasty was created as a web testing tool. It has been forced to diversify following the emergence of Google Optimize and has adopted nudge marketing notifications as a way of differentiating its product.

Convertize, by contrast, started as a Neuromarketing Consultancy. Our background in Consumer Behaviour, Nudge Marketing and Conversion Rate Optimization sets us apart as a digital agency and as a software developer.

This background is reflected in a library of articles written by Nudge Marketing experts, and industry-leading publications such as our most recent: Smart Persuasion.

When we first had the idea for our Nudge Marketing notifications, we worked for several months to create messages based on proven psychological effects. Our specialists in Cognitive Biases and Behavioural Economics worked alongside Data Scientists and engineers to create a searchable library, an optimization algorithm and a user-friendly interface. Innovation and experience were combined to produce truly inventive software.

Our consulting experience and Nudge Marketing expertise means that we don’t just show notifications … we understand them.

Convertize has always been about innovation. We were customers before we were developers, and we have always tried to offer our subscribers something other solutions do not.

Some of our most popular innovations include:

When we started developing software for CRO and A/B testing, the market was full of bold claims. Software providers were happy to guarantee an increase in conversions or a ROI of over 300%.

We never make promises we can’t keep, and we only sell products that will bring value to our customers. That’s why:

These days, the A/B testing industry has embraced a more honest form of communication. Rather than promising their clients conversions, developers now outline “a culture of optimization” and describe their method as a “test-and-learn” approach. We like to think this was our first innovation.

AB Tasty and Nudge Engagement: A Form of Flattery

We were surprised to find AB Tasty’s new product so familiar. We began to wonder if they had been entirely open about their design process, and asked ourselves why they had not been more innovative.

However, on reflection, we have decided to take it as a compliment.

If a company like AB Tasty (with financing of over $24 million in the past 5 years) is unable to innovate beyond our product, then we must be doing something right.

We can be extremely proud of our team and all those who participated in the development of our product. In fact, this is the perfect time to say “thank you” to everyone who has helped us get to this point.

If we continue to innovate, and maintain our focus on finding good, honest solutions for eCommerce, there is no reason why we can’t continue to lead the biggest SaaS companies.

With any luck, they will be copying us for years to come.

The Secrets of Product Pricing: 4 Simple Ways to Sell More

Reading Time: 6 minutes Thursday evening, 2.00 pm. I find myself driving around, trying to find an open shop. It's...